July 31, 2011 was one of the worst days of my life. It was Sunday morning and my husband Charlie & I were getting ready for church. My son-in-law Tom called to tell me that I needed to get the the hospital as quickly as possible because my grandson, Kevin had been in a bad car wreck. Immediately Charlie & I drove to the hospital. Kevin was in surgery. Family & friends started arriving. We had no idea how serious this wreck had been.  From surgery they took Kevin to the trauma unit where they let us all go in to see him. I was not prepared for what I was about to see. Kevin was in a coma and on a ventilator. The left side of his head was bloody and badly bruised. Almost every bone in his body was broken. All I could do was pray and cry, just hoping Kevin would wake up and be ok. But there was no movement,  no sign of life. The machine was breathing for him. All I wanted to do was hold and kiss his sweet face, but all I could do was rub his hands and pray in the spirit for him.

We went back to the family room and the doctor came in. The news he gave us was not good. Kevin's brain was swelling and they couldn't stop it, but we kept going in to see him and praying. What now seem like days was approximately 31 hours when the doctor came in and told us that we needed to make a decision because Kevin was brain dead. I wanted to scream, "Noooo! We  can't let him go!!!" But we only had a few hours to make that decision. That is the hardest decision anyone could ever have to make. To say, this is the end, it's over, and let him go. The only way my daughter Tiki had the strength to make that decision was by the grace of God. How do you tell someone, that you love so much, good-bye? How? To know on this earth, we'll never see him again, never hear his voice, or feel his touch, or put your arms around him again. It's the most smothering feeling I know. I wanted to run & scream, "STOP!" He was 25 years old, but was my grandbaby, and there was Tiki, my baby girl watching her baby die. There was Derek, Kevin's brother, watching his baby brother die. They had always been best friends. His cousin Dustin. They had been like brothers. The three of them had been the Ninja Turtles together. I was hurting, my heart was breaking, but I wanted to stop the hurt and pain for them. I'd always been able to help them when they were hurting before, but this time I couldn't. I couldn't stop the pain for me and I couldn't stop it for them no matter how bad I wanted to.

I prayed for comfort and I know the sweet Holy Spirit comforted us. That's the only way we got through the next few days. The decision to donate Kevin's organs was also made because we knew it was that was what Kevin wanted. His friend Blake had passed away a couple of years before and was an organ donor. Kevin told his Mom that because he was an organ donor Blake was a Superhero, and that if anything ever happened to him he wanted to be an organ donor, a Superhero. Kevin was such a giver & he is my Superhero.

So now there is the autopsy, and we're having to wait for days until they finished the autopsy for Kevin's organs to be harvested. We didn't even know what day to plan his funeral. The waiting was awful, knowing they were taking parts of his body was hard, but it gave us time to plan his funeral, or as we called it, Kevin's Home Going Party, the Celebration of His Life that was way too short. We planned a party that Kevin would have wanted if he had planned it himself.

There were sleepless nights, and crying all night long. I still had to work, so I cried and worked until finally it was time for his service. So many friends and family came to honor him. I've never been more proud of my family. Tiki and Tom spoke about what a great son Kevin was and funny stories about him. Derek sang, Your Guardian Angel, with Kevin's best friend Alisha. Every word that was spoken about him and every song that was sung was so much Kevin. Michael Ketterer sang, You're Beautiful, and a song that Michael wrote called, Dusty Road was awesome! They are on YouTube if you want to listen to them. We had all of Kevin's favorite things there. Batman, Marvel Comics, Ninja Turtles, his bowling ball & his trumpet. We celebrated his life with everything we had in us. Kevin would have loved it!

Then his homegoing service was over, and now there is life without Kevin. I had such an empty feeling. There was hole in my heart that only he could fill. My broken heart and mind were filled with sweet memories. Only a few days before Kevin had called me to ask me if I was going to the hospital to visit his grandfather Theo, his Pipi. Kevin was going to visit him and he had a new girlfriend with him and he wanted me to meet her. I had just left the hospital and was almost home.  I said, "Oh Baby, I just left there. I wish I had known you were coming and I would have stayed." I was taking care of my dad & needed make supper, but everything inside me wanted to turn around & go back to the hospital. Oh how I wish I had gone back for just one more hug.  Kevin said, "That's ok Mimi. I just didn't want you to be left out." We talked for a few more minutes & I said, "I love you so much Kevin!" He said, "I love you too Mimi. Sameristicaler!" And we laughed. It was a word that he had made up for "just us"  when we said good-bye on the phone or were together, I love you Mimi. Sameristicaler!"  It was "our love word". Now he was 25 and hadn't said it in a while until that night. That would be the last time I would ever hear him say that to me. I will cherish those few minutes for the rest of my life.

Now, all I have are memories and I live for those sweet memories to show up. I talk about them and laugh and cry. I do whatever I have to to keep them alive.

It's been over 7 years now since you left us. It's still fresh in my heart. There are days it feels like it just happened. Only God and prayer get me through it. Talkng with Tiki and reminiscing. I have the sweetest assurance that I know where Kevin is. One of my favorite memories is Kevin coming to church a few months before he died. He sat on the front seat on the front row with Tiki and Tom. As soon as the alter call was given Kevin stepped forward. We all went down to pray with him. When it was over I said, "I'm so proud of you Kevin." and he said, "I just got tired of trying to do it by myself." Kevin is in Heaven! He's in my future because Heaven IS for Real. Jesus made it possible. Kevin said, "I made it! It's amazing! I didn't know it was going to be like this!" I believe it with all my heart and am in great anticipation for that reunion day! I know Kevin is waiting there with our other loved ones, with those long arms opened wide. I can hardly wait for his sweet hugs.

Sameristicaler Kevin! I love you baby! See you soon! 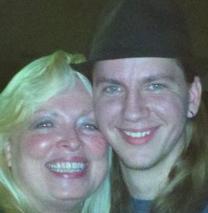